Tapjoy’s Maximum Impact PlatformTM provides mobile engagement and monetization services for leading advertisers and app developers. Advertisers rely on Tapjoy’s diverse suite of rewarded InterplayTM ads including video and rich media to impact performance. Developers utilize our technology and mobile expertise to acquire and monetize users. The Tapjoy SDK is currently embedded in over 15,000 mobile apps, reaching 520 million monthly active users. A 2016 comScore(TM) study confirmed Tapjoy Interplay? ads deliver an unprecedented 3x lift across all brand metrics. The company works with Fortune 500 brands and the Top 200 grossing app developers. Founded in 2007, Tapjoy is a global organization with more than a dozen offices worldwide and is headquartered in San Francisco.

Typekit
Typekit is the easiest way to use real fonts on the web. It's a subscription-based service for linking to high-quality Open Type fonts from some of the worlds best type foundries.

Wordpress Plugins
Plugins are tools to extend the functionality of WordPress. The website uses various plugins from WordPress to provide additional functionality. Some of them may be listed here.

AddThis
Widgets that allows visitors to save and promote the site.

Stocksy
Images on this site may have been sourced from Stocksy.

Guide the ship out of the port. Similar to the board game Rush Hour, your goal is to move the ships up and down and left and right to create a path for your ship to escape.

What separates TapOut from other similar games? 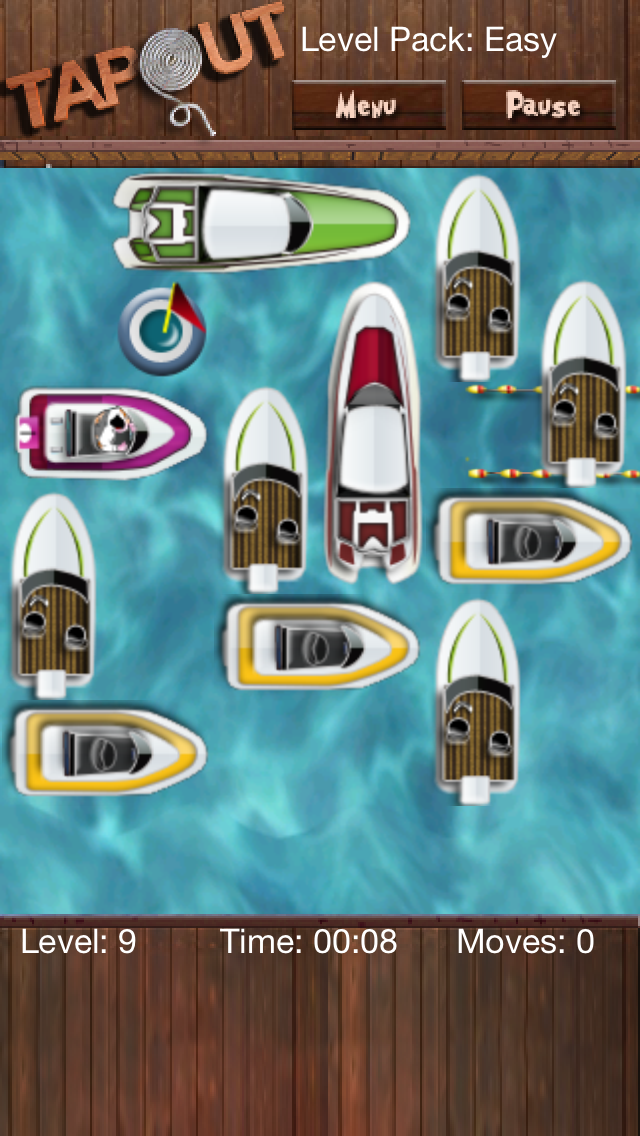 If you have this game don't ever delete it!

I downloaded this game and purchased the extra level packs. Got bored so uninstalled the game. After a few months i thought I'd give it another chance. The levels i bought previously were gone! So i played through the game again hoping they would be available. They weren't. Tried to redownload the levels. No go. Said they were already downloaded. Stupid game. Just got the newest update. Crashes after every level.

I used to love this game but just deleted it because it keeps making you watch their lame 30 second Kim K. advertisements. You can't even click out of them! Sad and ridiculous.

I remember playing this game a long time ago, and it was great. However, because its so old, with every level you pass the stupid Kim K game advertisement appears! Please stop this, every time you pass a level a advertisment appears, it's really annoying and makes this game unbearable.

Enjoyed it until the end

I beat the entire game, all 100 levels and I felt accomplished. Designed well and entertaining. Really simple.

StoreKit
StoreKit enables users to embed a store in their app. It also process financial transactions associated with the purchase of content and services.

New Relic
Know exactly where and when bottlenecks are occurring with your application framework. It's easy, it's fast, and it's free.

OpenUDID
Open source initiative for a universal and persistent UDID solution for iOS.
Tapjoy
TapjoySDK libraries allow you to display advertisements in your app (including the offerwall) and / or acquire new users from Tapjoy.

They are headquartered at San Francisco, CA, United States, and have 62 advertising & marketing contacts listed on Thalamus.

Sign Up to view all Tapjoy contacts and reviews!

They are headquartered at San Francisco, CA, United States, and have 62 advertising & marketing contacts listed on Thalamus.

Tapjoy works with Advertising technology companies such as DoubleClick.Net, Bizo, AppNexus, LinkedIn Ads, AdRoll, Twitter Ads, Openads/OpenX, Yahoo Small Business, IponWeb BidSwitch, Facebook Custom Audiences, TripleLift, Rubicon Project, Google Floodlight Counter.
This website use cookies to enhance the user experience and analyze performance and traffic on our website. We also share information about your use of our site with our media and analytics partners.
日本日本乱码伦视频在线观看_中文字幕人成乱码在线观看_波多野结衣中文字幕在观线看